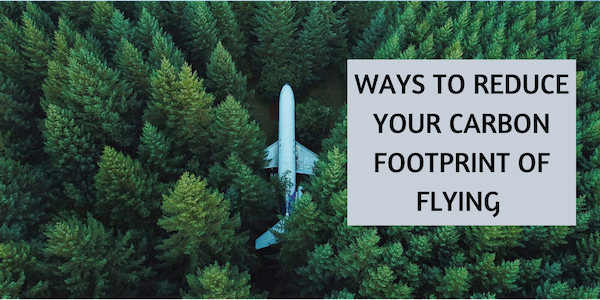 More and more people are becoming aware of global warming and the part they are playing in it. This has led to an increased amount of people trying to be more environmentally friendly, in an attempt to reduce their carbon footprint of flying. But there’s no denying that it can be an overwhelming task as there are so many factors to consider, especially when it comes to flying. So we have prepared a helpful guide on what you can do to help.

A study in 2018 found that the current carbon footprint caused by global tourism is at 8%! It is predicted that tourism will play a huge part in causing greenhouse gas emissions to rise. It is calculated that aviation greenhouse gases will only increase as the demand for flying is rising with more people travelling daily.

Another report by UN shows that travelling by plane could come to produce as much as 12% of global emissions by 2050. This is even if the aviation industry manages to meet all their goals like using biofuels and improving their technology. If they fail to do that, then we are looking at carbon emissions increasing by 27%!

Check out what you can do about it below!

In this fast-paced world with easy to access flights for a weekend getaway, we have all become too accustomed to taking flights more regularly. So flying less might seem like a really obvious one but should be one given more thought. We are yet to create carbon-neutral flights so until that happens, we should all try to take fewer flights as this will certainly help decrease your carbon footprint.

For instance, before booking a flight, really think about it and ask yourself if you really need to fly to that destination? This should be especially considered when you’re considering taking a business trip. Nowadays, a lot of travel has become business-related, with people sometimes flying for just a day!! But before flying, you should consider other options, for example, if that business meeting could be conducted online? With our technological advances, a meeting could easily take place over a Skype call, a Google Hangout, or any other online options. This is not only cost-effective but also environmentally friendly so you should definitely take this into consideration.

Consider a staycation! Instead of travelling internationally, why not travel domestically? Staycations are not only cheaper but they are also more environmentally friendly too. Not to mention, they are far less stressful because you don’t need to worry about carrying or forgetting any of the important documents or stressing about missing the flight! You simply pack some clothes, get in a car and you’re all ready for your holiday. 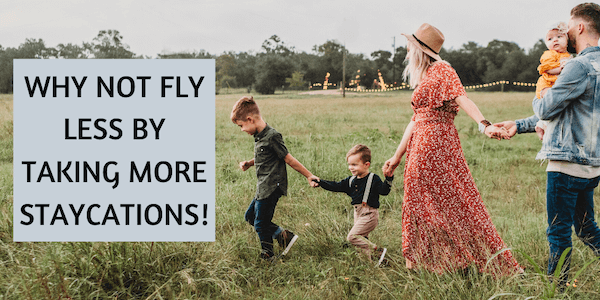 We know not everyone will be able to cut down on flying so if you do have to fly, consider flying in economy class. Flying in business or first-class means that you get more space per person, which also means more carbon emissions per passenger. Not to mention, there’s usually more luggage allowed in those classes which adds to the weight and overall carbon footprint of the flight.

World Bank conducted a research in 2013 in which they found that the average carbon footprint of a business class traveller was 3 times more than economy class and it was a staggering 9 times more for first-class!

This may surprise you but if you travel light, it will mean you leave a smaller carbon footprint of flying. This is because the heavier the luggage, the more fuel the plane will consume. Therefore, only take what you absolutely need and try not to take the whole house with you! Why not check out our amazing packing hacks? They will certainly help! 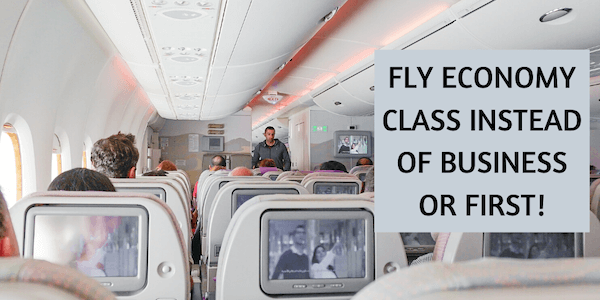 So what is carbon offsetting?

It’s a scheme that lets both people and companies contribute to environmental programmes in order to balance their carbon footprint of flying. These programmes will often be based in developing countries and their main purpose is to reduce overall carbon emissions around the world. Some could involve things like investing in cleaner energy technology such as solar panels, whilst other schemes will try to plant trees so they can soak up the carbon dioxide.

Some people or companies will aim to offset their whole carbon footprint but some choose to simply neutralise their impact of one specific activity. For instance, you take a flight from London to New York and you want to ensure that you don’t have a carbon footprint of flying, you simply go to the scheme’s website, where they will have an online calculator that will tell you how much carbon is produced by the flight. You simply pay the carbon offset scheme and they will reduce the equivalent amount of carbon produced elsewhere in the world, thereby making your flight’s carbon footprint neutral.

How are carbon offset schemes calculated?

There are many systems that are available to calculate the amount you have used. The most basic one will simply use the number of miles you have travelled. However, some of the more comprehensive ones will look at what class you travelled, what kind of plane you travelled in, the fuel used, and the number of people that flew in that flight. Some go as far as checking the time of day and weather too because that has an impact on the environment too.

Should you carbon offset with your airline?

This can seem like an easy option as all you have to do is simply pay a little extra when purchasing the ticket and your airline will do the rest. Roughly a third of airlines claim to contribute to some sort of a carbon offset scheme. But how they offset can vary a lot. Some airlines may give you the option to buy it before booking but others will only let you do it afterwards, which can mean you won’t know the cost until after you have booked.

Whilst this may seem like an easy option, we recommend you always check the fine print of the airline’s scheme first. Carbon offsetting schemes are not all created equal so it’s best to do your research before picking one. Go to their website and read about it and before you buy it, ask yourself if it’s worth your money or is another scheme a better option? You could do this by looking at things like how they measure your carbon footprint of flying, will they only look at miles or do a more comprehensive check like seeing what class you travelled in? You can see what kind of projects they are funding, as well as seeing if they have credentials from verified schemes like the Gold Standard or Verified Carbon Standard. 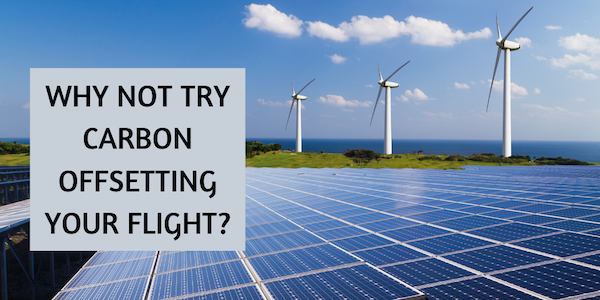 What about offsetting directly?

If you don’t like the sound of the airline picking the scheme to contribute towards, you can always choose to offset the flight directly. This way you get more freedom to choose which scheme you want to invest in. When picking a scheme, again, have a read through it properly and see if they are certified or not. The Gold Standard is one of the biggest offset schemes that many recommend. It was established in 2003 by the World Wide Fund for Nature and other different environmentalist groups and NGOs. Their projects aim to help people in developing countries as well as reducing overall carbon emissions.

What are some of the pros of carbon offsetting?

What are some of the cons of carbon offsetting? 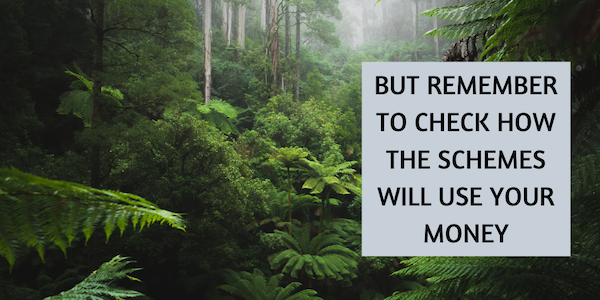 Carbon Footprint of flying vs. train

Whilst carbon offsetting is good, the best way to reduce your carbon footprint is by trying to avoid flying. For instance, why not take the train instead if you’re only going within Europe? According to EcoPassanger if you flew from London to Madrid, you’d be emitting 118kg of carbon dioxide per person whereas if you took the train, you’d be emitting 43kg per person. We can already see the difference is huge!

However, it does depend on the type of train too because an electric train’s carbon emission is tested by seeing how the electricity is generated. But a diesel train’s emission can be twice as much as an electric train!

In order to make sure the trains are more eco-friendly, try to see where the source of electricity for the train is coming from. For example, in France, 75% of their electricity is generated from renewable energy sources like nuclear power, but if compared with Poland, 80% of their electricity comes from coal. So if you take a train from Paris to Bordeaux, it will emit 4.4kg of Co2 per person but if you travelled the same distance from Gdansk to Katowice, it will emit 61.8kg of Co2 per person!

So whilst getting the train is still a better option than flying, do try to see which type of train you take to ensure you maximise your carbon footprint reduction. You can use Eco Passeneger’s calculator to find out the difference for your journey too! 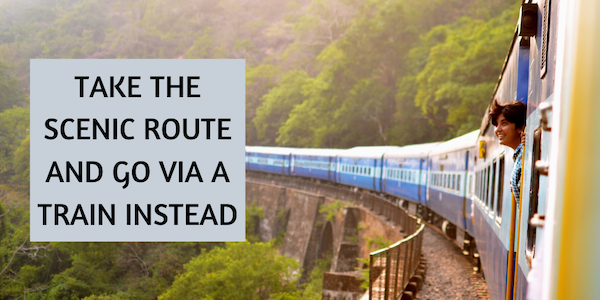 Carbon Footprint of Driving vs. Flying

Driving will be especially good for the environment if it’s electric but even if it runs on diesel or petrol, it is still a better option compared to flying! However, do remember, it’s not simply that cars are better, there are other factors to take into account. For instance, if you’re driving from London to Madrid but you’re going by yourself, then you’re producing more carbon emission than if you were to fly there. But if there’s more than one person then the car is the better option. So if you do want to travel by car, make sure the car is full or there’s at least two of you because this way you’ll actually be having an impact. 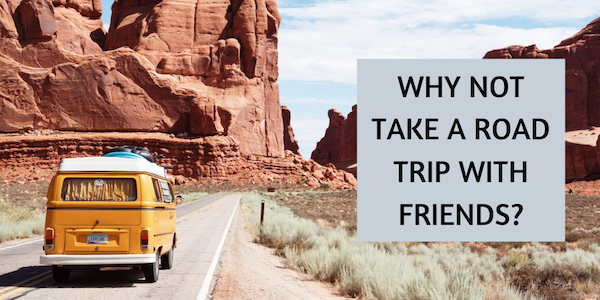 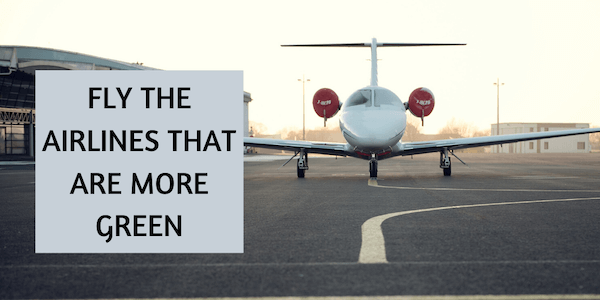 Now that you’ve taken steps to be more environmentally friendly, why not make sure you stay in a green hotel too? This will ensure that your whole trip is eco-friendly! These hotels have usually taken measures that ensure their guests have a good time, as well as minimising their impact on the world by reducing waste and toxicity in their hotels.

What are some of the features of a green hotel?

So next time you book a hotel, make sure you go green! If you’re struggling to find which hotel is green, simply see if the hotel has been given the green key which is basically a credentials to say the accommodation is eco-friendly. 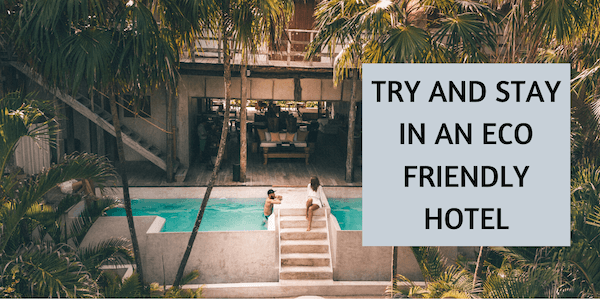 Things to consider next time you fly

We hope this helps you make more eco-friendly choices! Remember to make a conscious decision to be more eco-friendly and you’ll help the environment, even if it seems something small like packing lighter when travelling by plane!