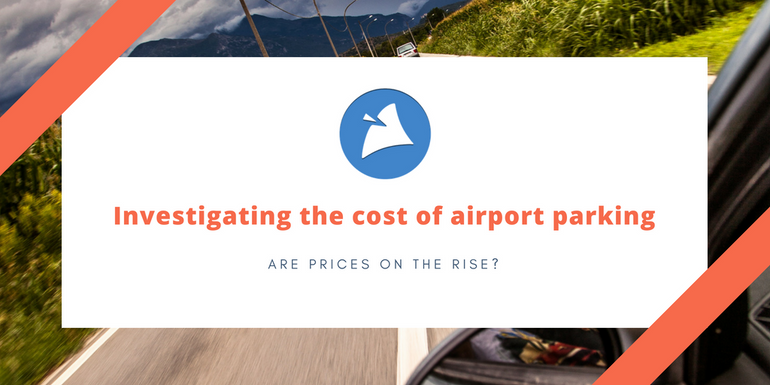 When you’ve sorted your holiday budget and got everything ready to go, the last thing you want to do is think about how to get to the airport. There are plenty of options available, and people often default to public transport because “airport parking is so expensive!”.

But is it? Train fares rise every year (the level of service not always increasing with it…!) and the same can also be said for other methods of transport. Is it the case, however, for airport parking?

At Airport Parking Shop, we decided to have a look at whether or not airport parking really does always get more expensive year on year. We first did this in 2014, and the results were surprising! To see how it compares to what we found in 2014, see here.

Are airport parking prices going up?

Back in 2014 we compared prices for only the cheapest car parking options at each airport, and looking back at this data we felt this wasn’t representative of the wealth of options that are out there. Instead, we’ve taken an average of all the car parks at each airport that were available for our chosen dates. We ran these quotes in early July for the same two weeks in August.

What did we find?

On the whole, the cost of airport parking is not dramatically increasing. In fact, the average price change across all the airports was just 2.7%. Bearing in mind that train fares have increased by a whopping 3.4% since 2017, we don’t think this is too bad! This means that on average, you should expect to pay around £95 for two weeks parking in August when booked in July. Of course, if you want on-the-doorstep parking, you may pay far more than this. You can also save money by picking a park and ride service which are generally some of the cheaper options.

Of course, there are some winners in this scenario and some losers, so let’s take a closer look at the airports that are cheaper to park at than this time last year!

London City Airport saw a big drop of 43% – however, it is also the 7th most expensive airport to park at, so this is something to bear in mind! For the same two weeks in 2017, it would have cost you over £200 to park here – thankfully, 2018 comes in with a much lower £114 for the period, although this is still quite a hefty figure.

You can see the difference in prices for the other airports that showed a decrease in price below, most welcome is Heathrow, which of course is one of the most expensive car parks to park at! 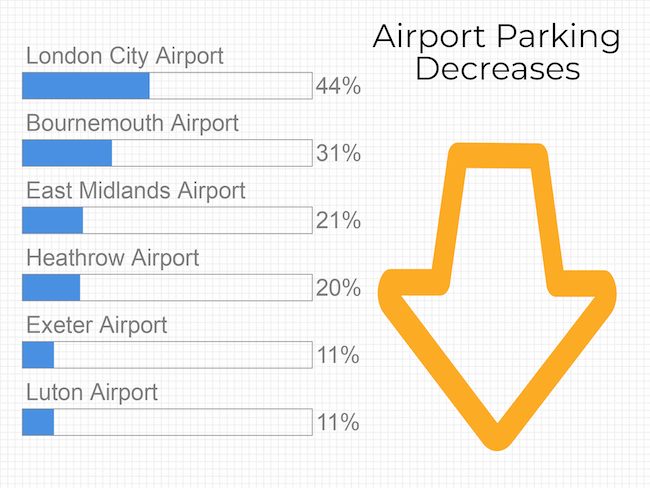 Which airports were the worst for upping the cost of airport parking?

The winner is… (drum roll please…)

In 2017 it was a relatively respectable £111 to park for two weeks – a bit more expensive than the overall average, but not by huge amounts. In 2018 this has risen by a huge 65%, to nearly £183. This may be reflected by the addition of more expensive car parks, or existing car parks upping their prices, we can’t be sure, but either way it’s a pretty big increase.

Southampton and Liverpool are close runners up with increases of 53% and 44% respectively – we hope there are some pretty impressive car park improvements to be justifying these sorts of price hikes!

The rest of the airports that saw large increases in prices: 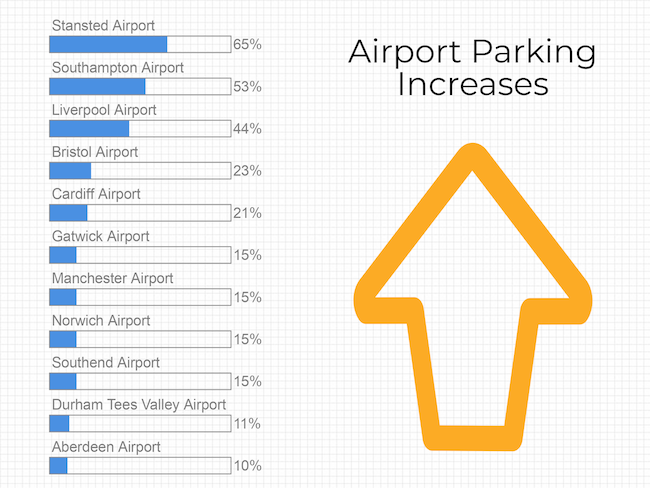 We were mostly impressed that nearly half of the locations we compared only had small fluctuations in price. 45% of the airports saw car parking prices move by under 10% in either direction. So you should find the cost of parking vary very little from year to year at these airports. The standouts from this category were Belfast City, Inverness, Leeds Bradford, and Prestwick which all had average prices relatively unchanged from year to year.

When we looked at the cheapest available car parking option for each airport and compared the prices between 2013 and 2014, we found that the prices remained the same for 19% of the UK’s airports. Parking cost at over half of the airports (15 out of 27 airports researched) was higher in 2014, compared to summer 2013.

Below you can find a spreadsheet with our 2013/2014 data and the 2017/2018 data. Because we chose to look at only the cheapest car parks in 2014, it’s not quite comparable to this year’s data, however, you can see that in some cases, the cheapest car park price from 2014 isn’t overly different to the average price in the last two years.

As you can see, some airports have indeed racked up the prices, but this may be affected by introduction of more car parks. Gatwick particularly has seen an influx of Meet and Greet products in recent years which tend to be more expensive, but you can’t deny the convenience!

Overall though, there isn’t a huge amount of movement with average airport parking prices. Just remember to book as far in advance as you can, and look at all the options available, it really makes the difference!