|This blog contains affiliate links, see the links with the asterisk sign |

DVT, or deep-vein thrombosis, is a condition which occurs when a blood clot forms in a deep leg vein (typically the calf or thigh). If the clot stays put, stuck to the wall of the vein, it causes redness and swelling to the area. But if part of it breaks off it can travel to the lungs (pulmonary embolus) and cause serious illness or even death. It can also be a contributory cause of a stroke or heart attack. Unfortunately some DVTs cause no symptoms, for instance in the pelvis, and the first that is known of the condition can be a pulmonary embolism.

How can travelling cause a DVT?

Travel-related DVT is caused by sitting still for long periods of time in cramped conditions. The blood flow slows down and the blood collects in the legs when in a sitting position. Slow blood flow is more likely to cause a clot to form. A long period of time is considered to be four hours or more, and DVTs can be caused not only by flying but also travelling by car, coach or train.

How likely am I to get a travel related DVT?

Not all travellers have the same risk of developing a DVT. The following factors raises your risk:

As some DVTs are symptom-free and some do not present themselves until a while after the flight it is difficult to obtain accurate figures. However, it is thought that one DVT occurs for every 4,656 flights of more than four hours. Notwithstanding the small risk, trying to reduce excess weight and giving up smoking makes sense. 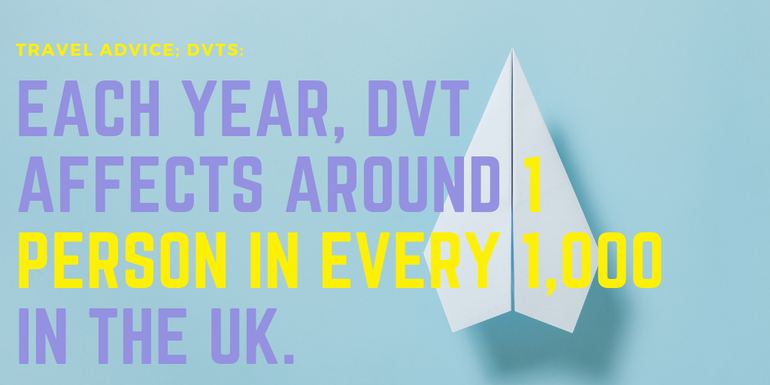 What else can I do to prevent a DVT?

Prevention of DVTs is vital since if one occurs on a long-haul flight, it may not be possible to get help quickly.

If you fall into one of the aforementioned catergories making you at increased risk of developing a DVT, keeping mobile while travelling is important. Whether you are simply doing your in-your-seat exercises or walking up and down an aisle, it will all help lower your chances of a DVT. You want to encourage blood flow to your legs rather than letting it pool and so it is also important that if you are unable to get up out of your seat as often as you like, that you don’t keep your legs crossed, or sit on them, for prolonged periods of time either.


We know some people like a quick tipple or two on a flight, but if you’re at risk of a DVT, it’s probably best to avoid one. This is because it causes dehydration and makes your blood more “sticky”, making it more susceptible to clotting. The same could be said for sleeping pills on night flights as they cause immobility. Our biggest piece of advice would be to drink plenty of water to stay hydrated, even if it means more trips to the loo (at least it’ll give you a reason to get up and stretch your legs!)

Or commonly known as “flight socks” help to stop the blood pooling in your lower legs and can be bought online, at many local chemists or even at the Boots store at the airport*. However, be aware that badly fitting compression stockings can raise the risk so take advice if necessary to make sure you get a good fit and know how to wear them correctly. If you have a plaster cast on your leg it will normally need to be split for the flight so seek guidance from your doctor or fracture clinic before you head off.

Although low dose aspirin is often taken to prevent clots in arteries, thereby reducing the likelihood of heart attack or strokes in those at risk, there is no evidence to show that aspirin is effective in clot prevention in veins. If you are at high risk of a DVT, then an anti-coagulant such as an injection of heparin may be prescribed by your doctor. This would normally apply only to cancer patients, those with thrombophilia (a condition where your blood has a tendency to clot) and those who have had major surgery in the last month.

Can I fly after a DVT?

The NHS advice page says that if you are recently recovering from a DVT, and are taking medication such as apixaban or warfarin, then you should be protected against a further one, making it safe to fly. If you are concerned at all, it is best to speak woth your GP to get the best advice.

If you develop pain in your chest, difficulty breathing or pain, swelling or redness in your calf or thigh after a flight, seek urgent medical help.

Swelling in the feet and ankles during and after flights is relatively common and not a sign of DVT.