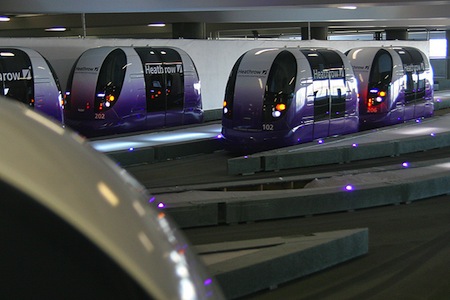 Back in Autumn 2011 an automatic pod transport system was revealed at Heathrow Terminal 5, designed by Ultra Global and allowing 800 passengers a day to travel stress-free between the T5 Business Car Park and the terminal. We say stress-free, how about adrenaline-filled and state-of-the-art-amazing?!

The award-winning £30m system took 6 years to develop and a year to trial prior to its launch and boasts driverless vehicles with self-recharging batteries, and enough space (and power!) to transport up to 4 passengers in each pod. 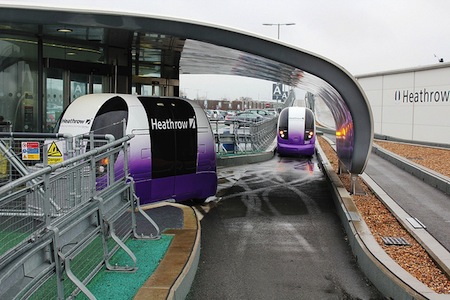 The pods find their way around using laser sensors, and initially it was estimated it would have cut the amount of bus journeys around Heathrow terminal by 50,000 a year.

Two and a half year later, it is reported that the pod system has had over 700,000 passengers on board, and a year ago it marked its 1 millionth driven mile.

What’s in the ride?

The system has 21 pods, a total length of 3.8 km one one-way guideway, and 3 stations – two of them at the T5 Business Car Park and one at the T5 terminal itself.

– Smooth, virtually silent 5 minute ride.
– The pods can reach the speed of up to 25 miles per hour.
– No stopping from start to destination.
– The journey is on demand, you don’t need to jump on an approaching pod!
– The pods are there at your service for 22 hours weekdays, for 21 hours on Saturdays and 20 hours on Sundays.
– No timetables. No waiting. Self-recharging batteries ensure the pods are always ready to go.
– Computer-powered equal distribution of pods throughout the system based on demand.
– Journey time between the same two locations is approximately 10 minutes shorter compared to the original bus shuttle.
– The pods use 70% less energy than it would take to power a car.

The passengers seem to be loving the innovative driverless transfer service. Social media is inundated with photos, selfies, videos and general ‘wow!’ feedback, such as:

I have seen the future. The driverless pod at London heathrow T5! pic.twitter.com/28PWO7vzxF

Intrigued? You can give the T5 Pod a go by booking your car parking at Heathrow Business Car Park. We’d like to hear what you think!