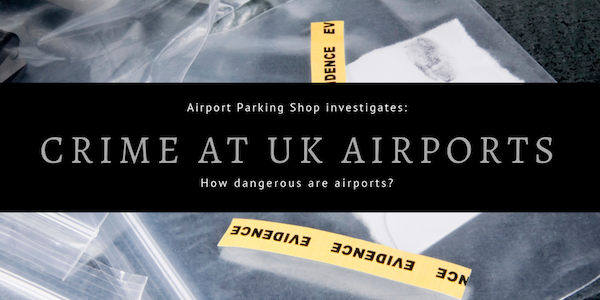 Going on a trip, whether it’s for business or for leisure should be as straightforward as can be. Here at Airport Parking Shop however we do sometimes receive the odd story of a bad parking experience. We wanted to find out what the volume of crimes at airports were and how much of that was parking related to see how much of a problem it actually is. We also wanted to know what the most common crimes at airports are, so when you’re travelling you can be aware of this and hopefully avoid becoming a victim.

The good news is, crime rates at airports are really, really low. On average, the crime rate across the airports in England and Wales that we looked at was 0.009%. This was for crimes recorded as a percentage of passenger volume at the airport. In England, Wales and Northern Ireland, using 2018 figures, the rate was around 0.086% (ONS, 2018). So that means that you’re ten times more likely to be involved in a crime elsewhere in the UK than you are at an airport, which is a pretty reassuring fact! 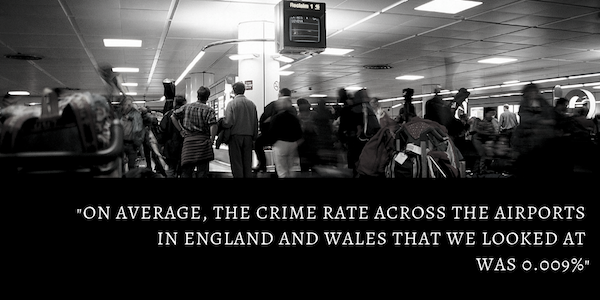 Types of crime at Airports

Which airport is the most dangerous?

Technically, the airport with the most crimes recorded is Heathrow. It would be a misnomer however to claim that this is the most dangerous airport because it also has the highest volume of passenger traffic! As a percentage of the passengers, its volume of crime is actually well below the average at 0.006%.

If we look at the percentage of crimes against the total number of passengers, Teesside International Airport is actually the most dangerous. At this airport you are more likely to be involved in a crime than at any other airport. Let’s put this into perspective, however, as realistically it means that around 0.6 people per 1000 would be affected by crime, and when you consider that Teesside only actually had around 140,000 passengers in 2018, it doesn’t seem all that dangerous! Bearing this in mind, how well did the other airports do? Below you can see the top 3 most dangerous and least dangerous airports when we look at crime rate versus passengers:

Interestingly, if we were to think about personal safety, and only count violent crime that may affect you as a passenger, the result is a little bit different. For example, if we only include weapons possession, public order, robbery, theft from a person, and violence and sexual offences, then Gatwick Airport moves out of the safest airports group and is replaced by Belfast City, which implies there is proportionally more violent crime at Gatwick.

There is an argument to say that by including the smaller airports the data is skewed slightly as due to the lower volume of passengers there is less chance of things going wrong. So let’s look at the major airports in England and Wales; Heathrow, Gatwick, Manchester, Stansted, Luton, and Birmingham. Out of these airports, London Stansted Airport unfortunately comes out the worst with the highest crime rate. It also has one of the highest rates of criminal damage and arson, and the highest rate of weapons possession! 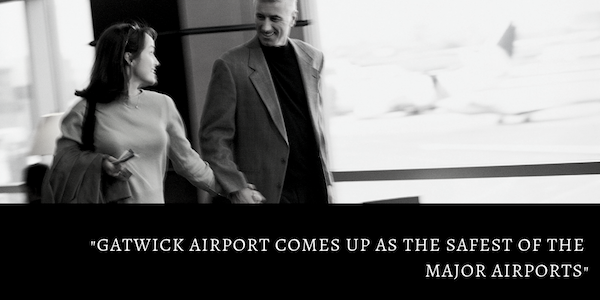 On the contrary, Gatwick Airport comes up as the safest of the major airports when you look at crimes per passenger volume. The rates of crimes across the board are all mostly below the average, and in only once instance – theft from the person – does it come out near the top. So, you might want to keep an eye on your pockets and luggage, but we’d recommend that in any airport!

How safe is my vehicle when parked at the airport?

This was our motivation to research this data and we are pretty encouraged by the outcome. On average, vehicle crime made up just 6.5% of crimes at airports. Anti-social behaviour, other theft, shoplifting and violence and sexual offences were all much more common across the airports. However, there are three airports that stand out as having much higher than average vehicle crime rates. 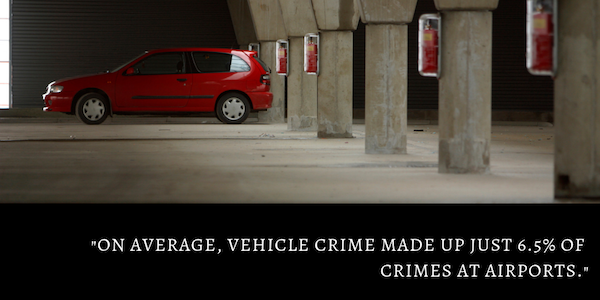 Birmingham tops the table at over 17% of crimes being related to vehicles, followed by Manchester at 14.65% and Leeds at 12.16%. Most other airports were comfortably between 0-8%. We contacted the police forces who are responsible for Birmingham, Manchester and Leeds Airports for comment about these high rates.

Responses from the airports

Steven Jobson from the West Midlands Police Airport Unit told us that unfortunately 2018 was a very unusual year for vehicle crime at the airport. They had a series of incidents that were all caused by a “career criminal”, as well as a spate of crimes carried out as revenge against a particular company. This activity is of course not that common and has unfortunately skewed the figures for the year!

Likewise, when PS Neil Perkis from Leeds Bradford Airport Police responded to our query regarding their high vehicle crime rate, we found out that the airport car parks were targeted by an organised crime unit intent on stealing satnavs. They have made several arrests in connection to these crimes and since then their vehicle crime rate has decreased.

So overall, parking your car at the airport is really quite safe at the majority of airports, with minimal chances of crime. Even when the rates seem quite high, there is often a reason for this as explained by Birmingham and Leeds Bradford. Of course there is always a risk, which is the same for many places where you leave your car unattended! There are however ways to minimise this risk further:

Tips to keep your car safe at the airport

So what crimes are the most common at airports? 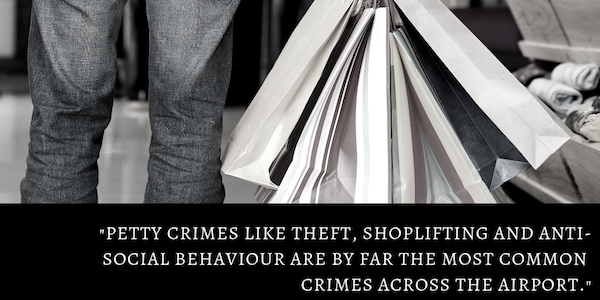 You can take comfort from the fact that in most cases the most popular crimes at airports are not actually the violent ones. Crimes like theft, shoplifting and anti-social behaviour are by far the most common crimes across the airport. Plus, we were very encouraged to see that the overall crime rate at airports is pretty low, which is good news for your airport parking and for any concerns you may have when travelling!