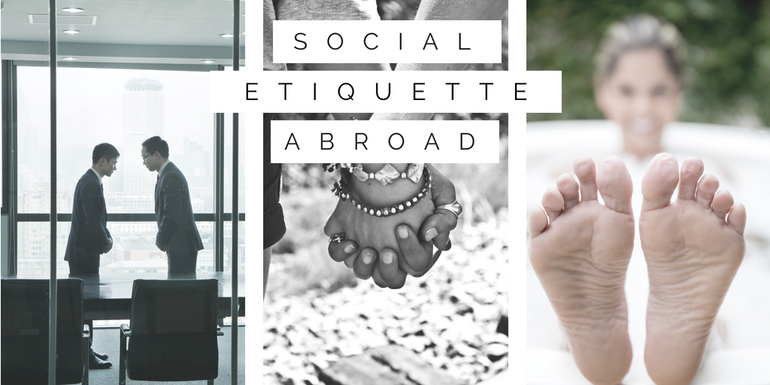 We have all heard the horror stories; women attacked for showing too much flesh or couples being arrested and imprisoned for holding hands in public.

Whilst there is a lot of media hype around these stories, it is important to know that there really are some things that can cause great offence in religious countries, and even land you in trouble. When travelling to a country outside of regions such as Europe, North America or Australia, it can be very important to be aware of varying social etiquette to keep you safe.

We have put together a quick guide to different regions across Asia, Africa and South America to help you familiarise yourself with dress codes, eating habits and gestures across the differing cultures to prepare you for your trip.

In Arabic or Islamic countries, the thumbs up gesture is extremely offensive, as is extending the index finger towards someone (similar to the middle finger in western culture). When in a business meeting, crossing one ankle over the opposite knee to expose the sole of the shoe or checking your watch for the time is also an insult, so refrain from doing this!

When visiting the UAE, you should be mindful of sensitive dress codes. Women ideally should be covered from shoulder to knee, and mens shorts must cover the top of the leg. If you are heading to a place in which Sharia Law is enforced, know that women must be covered from the upper arms and shoulders down to her calf – for men, shorts are not allowed. 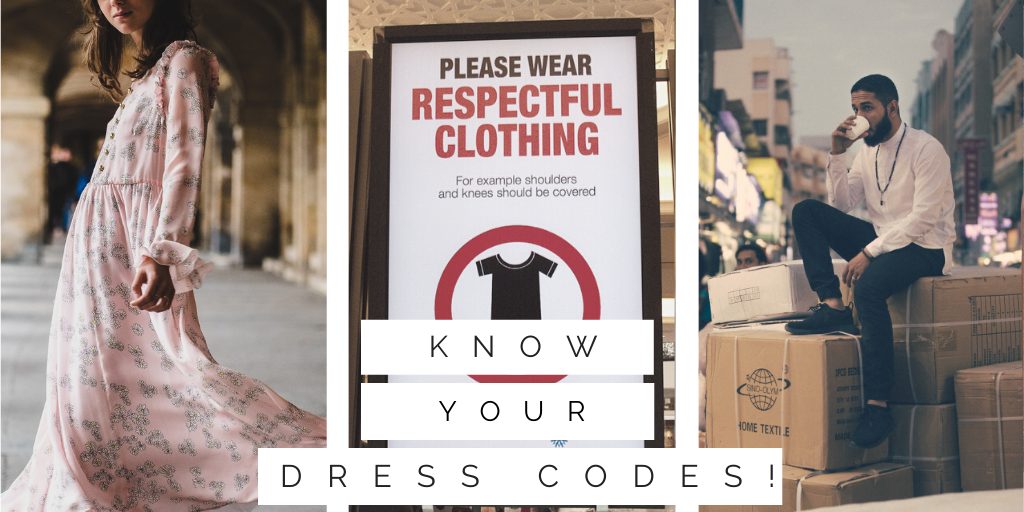 A curled, ‘come here’ finger is a symbol of death in Singapore and it can get you arrested in the Philippines; it has also been known to end with the offender receiving a broken finger, in an attempt to sway him from using it in the future!

A women wearing no makeup or bra in Japan is considered to be unprofessional and therefore showing disregard for the place she is in or event she is attending.Business men should always exchange cards, with both hands, prior to bowing to greet one another (make sure your shoes are shiny, they are likely to be inspected by your counterpart!).

When in Malaysia, always use your right, or both hands, to pass an object to someone, never your left, and if you are female, you must dress modestly at all times.  Remember to not show the soles of your feet to anyone when sitting down on the ground  in Thailand or touch anyone’s head – it is considered sacred.

If visiting outside of a resort such as Sharm el-Sheikh in Egypt, PDAs are disapproved of – even holding your partner’s hand will attract disappointing stares from locals! You should also ensure that you always have your shoulders covered and that shorts are only to be worn at beach resorts for males and confined to private resorts for females.

Whilst a handshake is a common form of greeting in Algeria, don’t be offended if you are female and a male does not do this; he is not being disrespectful, but in fact, the total opposite. Be aware that if you visit during Ramadan, you should avoid smoking, eating or drinking in public. 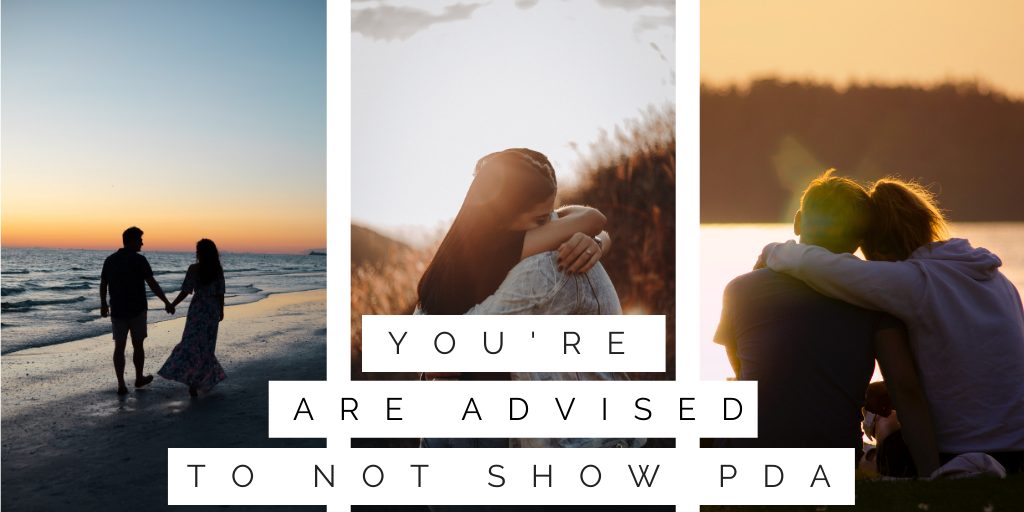 Remember that when you greet someone in Kenya, the younger person / people in the group should bow to the elders slightly and you may notice that eye contact isn’t maintained for very long – this is not disrespectful and you should avoid maintaining eye contact for a prolonged period during introductions as it can be deemed as intimidating.

Whilst visiting Nigeria, be mindful that women should wear clothing that covers their arms and legs and that shorts are only to be worn at a sporting event. Some women cover their heads, usually if they have long hair.

Regions in South Africa are more westernised, except maybe a little less formal. If you have been invited to dinner at a South Africans home, make sure you bring the hosts a gift such as a good South African wine or flowers, check ahead of time if they would like you to bring a dish and do not wear jeans unless the hosts have said so!

Expect the Argentinians to be fairly blunt and to the point – not to be rude, just efficient! Note that when you are dining in either a restaurant or at a host’s home, make sure you are dressed well, that you don’t pour the wine (it is beset with cultural taboo), but do leave a little food on your plate as this is considered polite and make sure to place your fork prong down, with the handles to the right.

Whilst we think being punctual is a very good practice but in Venezuela, it is actually considered absolutely normal to come 10/15 minutes late to dinner parties. In fact, if you arrive early, that means you are very eager or even greedy! So make sure you to attend the dinner parties slightly later than the given time and take your time getting ready. 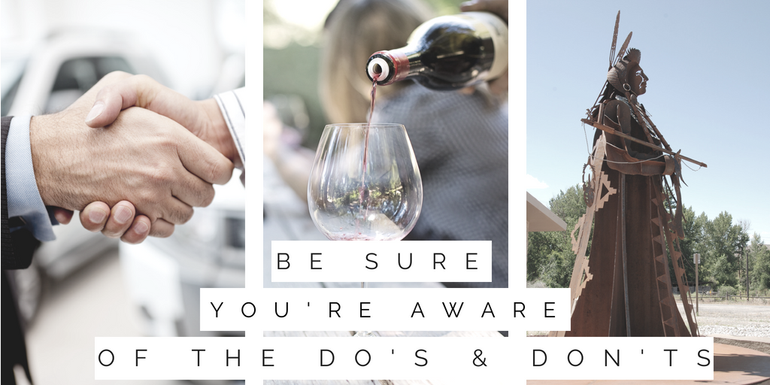 Be aware that in Brazil, skin colour is the most recognised way to determine your social class, seeing those with darker skin to be socially and economically disadvantaged so don’t be surprised if you witness this. If you are giving a gift, avoid anything black or purple as these colours are associated with mourning and girls, when it comes to dressing; yes, revealing, sexy clothes are the norm and are encouraged in places such as Rio, but if you are visiting a more southern part of Brazil, be a bit more conservative!

Chileans use several hand gestures that visitors should refrain from using, such as flicking their hand from under the chin, clicking their fingers and hitting the left palm with the right fist. You should however use someone’s title to greet them if you know it – if you are unsure, “Senor” or “Senora” followed by their surname is acceptable. Photographing a Native American without their permission is unacceptable.

Hand Gestures around the world. 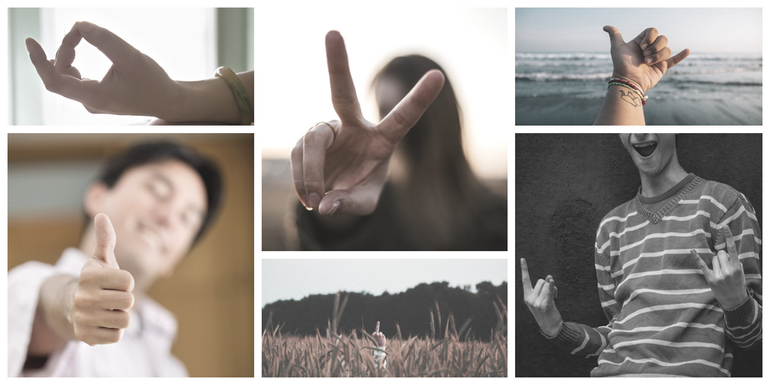 We have covered a few hand gestures, but in case, here are a few more that you should know the different interpretations of!

Thumbs up for OK. Making this gesture whilst moving your hand up and down in Australia is considered a grave insult.

Ok Symbol – Offensive in France and Latin America and means you are calling someone a rather nasty name! Be careful when using it in Germany – in some regions it means ‘job well done’ and in others, it is an offensive insult. Over in Turkey, it is used to call someone homosexual.

The Horn Fingers – used by rockstars usually in a positive manner (Rock On!) Buddhists and Hindus believe that the symbol is one used to dispel evil however, in many other cultures, it symbolises the Devil. In the Mediterranean, it means “your wife is cheating on you”!

The Middle Finger – offensive in most countries and cultures worldwide. In Arab and Mediterranean countries, holding the index finger up is considered just as insulting.

The “V” – two fingers up. In America, both the palm facing outwards and inwards means “Victory”. However, in the UK and Australia, palm inwards with a V is extremely insulting! George Bush found this out the hard way when stepping off a plane in Oz! 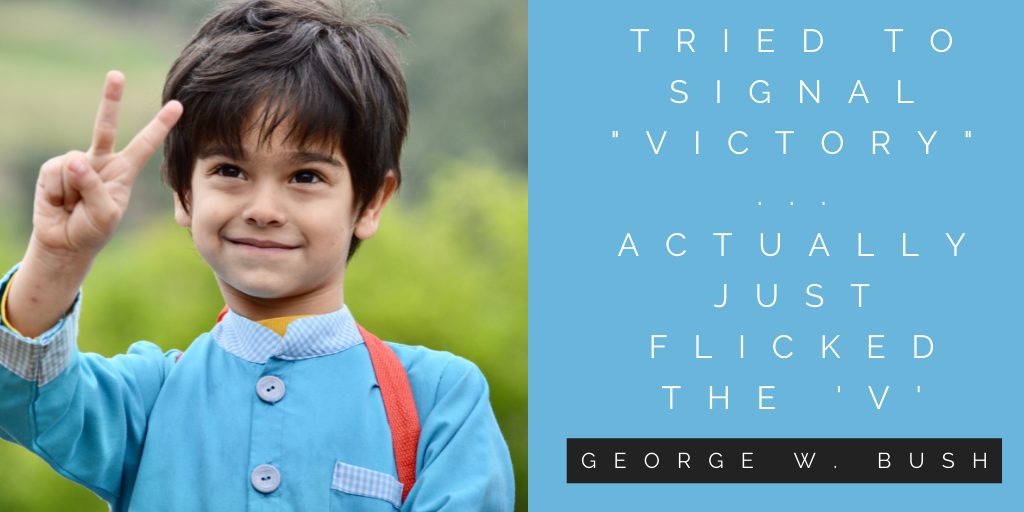